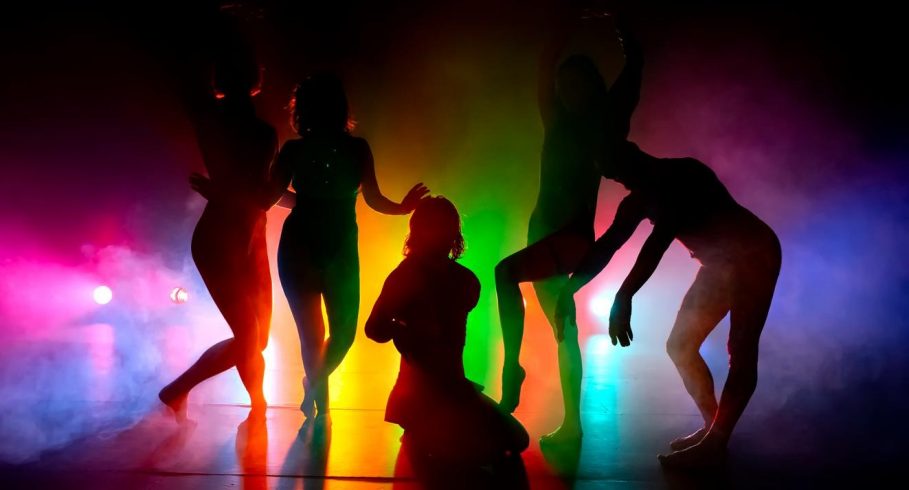 The choreography creates a dance rhetorical zone in which choreographic forms or procedural forms from recent dance history are brought together in the meditative image of switched-off computer screens, where they can be seen as a play of surfaces. A dance of a future nostalgia, a consolidation of differences in case we give up choreographic depth.

In fact, it is difficult to say very definitively what is happening or happens in Aleksander Georgiev’s choreography Screensaver, because its ambivalence is perhaps what makes it most interesting. But certainly in this choreography it is the screen that fuses its diverse and slowed-down dance-kinetic images into a coherent visual illusion, a surface on which – perhaps just like Warhol’s thirty-two different soup cans with their designs – everything is transformed into a single thing in the obscurity of differences. Yet, in this catalogue of kinetic images, it is possible to distinguish two main motifs: the art of dance and seduction. For any slightly more sophisticated dance spectator, this is a familiar experience and the kind of artistic nightmare that makes us both panic and furious, because there is nothing more unbearable than choreography that pretends to know our desires. Aleksandar Georgiev makes a procedural joke of this in his work. Forms of mutual objectification or interobjectivity, as art historian and curator Marko Jenko, PhD, put it in his lecture during one edition of CoFestival. However, in the case of the work in question, this mutual objectification does not take place exclusively on the level of artistic formalism, but such materials are fused with an economy of erotic or even sexual desire. Screensaver is a title that refers to a certain operation of looking, perceiving, accepting, characterised by a statelessness and cognitive passivity, rather than to a choreographic object. The switched-off brain, with which we, the spectators, are always the ones who transform ourselves into the commodified object of transactions, even if we think we have been autonomous in the exchange, is of course a state in which we can become receivers and conductors of the information that appeals to our instincts. If there is one thing that is messed up in Screensaver, this computer software that puts the machine into a power-saving, low-energy and low-memory state, without ceasing to function as an informant, it is this reception inertia, where a plenitude emerges from the mild, almost imperceptible transitions and images.

Aleksandar Georgiev is an internationally renowned dancer, performer and choreographer from North Macedonia and Bulgaria, who first presented his dance work in Ljubljana after completing the Nomad Dance Academy training programme at the 2009 Short Cuts, and in 2019 he performed at the CoFestival in the excellent duet Moonlight (2019), which he created together with Darío Bardam Damas.