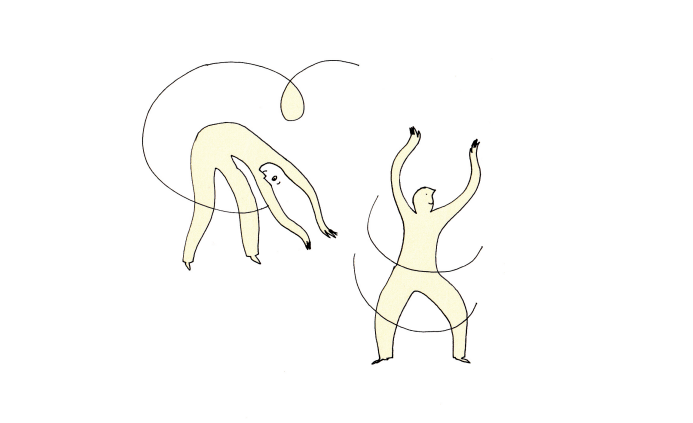 The Open Sketchbook exhibition consists of drawings made during the observation process of the Silver Gold project development, executed by an intergenerational dance and choreographic collective. The materials are part of a procedural work and are a visual response to the kinetic situations of contemporary dance practice.

Dragana Alfirević, the initiator of the Silver Gold project, invited visual artist Đorđe Balmazović to follow the process as an outside observer, but his role soon turned into that of a documentarist and co-creator. With a gaze that intersects the visible with the sensual, the artist has thus begun to transform dance into kinetic figures, bringing them into a field beyond their fleeting immediacy. In this way, images of dance in dance itself were created, as the hand that is drawing itself moves and at the same time folds, curiously searching, exploring, deciding, and last but not least, with its presence, supporting the bodies in movement. This exhibition is a kind of homage to dance, and at the same time it is dance itself.

Đorđe Balmazović is a member of Škart group, founded in 1990 in Belgrade, Yugoslavia. In the 1990s, the collective produced poetry fanzines and distributed them in street actions. In 2000, Škart founded two groups – the Horkeškart Choir and Orchestra and the Women’s Embroidery Group. Since 2012, the collective has been running workshops for children, migrants and the elderly.

Saturday, 26th of November, 7:30 p.m. – opening
Kino Šiška, Kamera
On display until the 4th of December