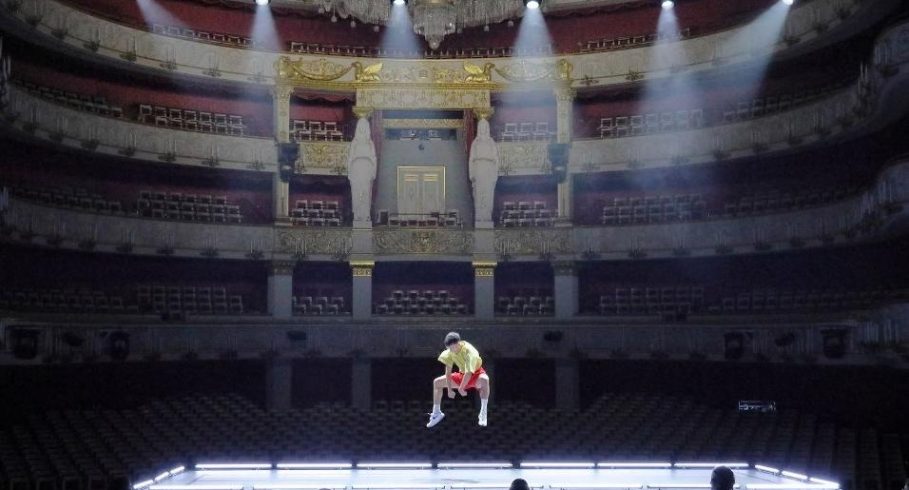 Moritz Ostruschnjak: Tanzanweisungen (It Won’t Be Like This Forever) (2020)

The palimpsest solo, danced by Daniel Conant in two »nonchalant swings«, is a sprint through the encyclopaedia of dance vitalism. An ironic work about »the dance that doesn’t lie« for the simple reason that it has nothing to do with truth or reality. A dancing joy that confronts the world with the fact that it cannot be from Mars, but rather is always from somewhere here.

German choreographer Moritz Ostruschnjak first painted graffiti on the walls of buildings in German cities and trained in breakdance, then started creating contemporary dance performances. The solo Tanzanweisungen (It Won’t Be Like This Forever), danced by Daniel Conant and dynamically divided into three sections, acts as a choreographic construction, a dance wall, a reality that the artist prepares in order to be graffitied by the performer. Tanzanweisungen is a series of recognisable and highly eclectic dance references (from folkloric forms to contemporary interferences with the so-called dance conceptualism) and their traces, which stand out from the palimpsest layers with their different contextual meanings, but share in common the manifestation of dance vitalism. Ostruschnjak glues the visual commentaries of British visual artist David Shringley to this eclectic body of Tanzanweisungen, which is clothed in the German flag by the costume and the blackness of the theatre hall, thus applying what is usually understood as an exclusive kinetic text to the commentaries that dissolve the semantic »innocence« of the body. During the Second World War, a catchphrase circulated among the liberal part of the Berlin population: »Let’s party while the war lasts, when liberation comes we’ll be fucked!« In the decades after the war, historiography also called to account a part of the contemporary German dance public that had participated in the creation of the dance art of the Third Reich in the 1930s and 1940s. No dance art or dance culture is without political or ideological implications, which is why Moritz Ostruschnjak creates an effective and short choreographic graffiti that calls dance to the contemporary defence, because it won’t be like this forever… It is perhaps worth noting that contemporary dance’s encounters with graffiti art, usually closely related to various street dance cultures, have proliferated in recent decades, with the South African artist Robin Rhode and the Brazilian choreographer Bruno Beltrao undoubtedly among the most prominent representatives of this kind of artistic interference. This is not be the first time Tanzanweisungen will be seen in Ljubljana. In June 2021, a year after its première, the solo was performed at Cankarjev dom in the Summer ReCollection programme (produced by the international network Aerowaves Europe and with the support of local partner En-Knap), but due to pandemic restrictions, it could only be seen by a very limited number of audience members.

Moritz Ostruschnjak studied at the Iwanson International Academy in Munich and furthered his professional training at the Maurice Béjart School in Lausanne, Switzerland. Since 2013 he has been working as a freelance choreographer. Over the last few years, he has created a series of acclaimed performances: Unstern (2018), Autoplay (2019) and the solo performance Tanzanweisungen (2020), which was performed at the 2022 German Dance Platform in Berlin attended by the CoFestival curatorial team.

A production of Moritz Ostruschnjak. The artist is financially supported by Réseau Grand Luxe and is a member of Tanzten denz München e.