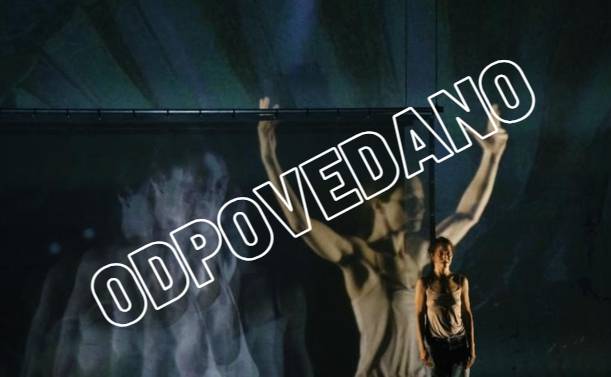 The multimedia performance Venus: Between Captivity and Flight acts as a synthesis of the artist’s dance work of the last few years. Botticelli’s painting The Birth of Venus represents for the artist the creative cut between heaven and earth, the generic cut that creates the conditions of all creation. In this highly poetic performance, the creation of man and nature meet not as an equation, but perhaps as a memory or a dream.

Botticelli’s painting The Birth of Venus, the emblem of the Uffizi Gallery in Florence, created by the artist in the 1880s, served as a starting point for the text, dance and visual material of Venus: Between Captivity and Flight, in which various artistic means, at the transition between reality and imagination, dream images, form a dynamic presence of something that emerges in between them, without renouncing their own mediums. The world of dream images is constantly interrupted by the forms of the corporeal present, inhabiting, challenging and transforming them, so that the expansive in-betweenness of boundless creativity may appear in its gradual manifestations. From these emerges a visual poem in time, which addresses the spectators with questions of the body and experience, the relationship to the other, the gaze and responsibility, desire as the driving force of creation, and our presence in the constant becoming embodied by nature. Theatrical images invite us to observe the constant emergence into space and time, the creative imagination and the beauty of the created. Venus: Between Captivity and Flight is a stage meditation on the relationship between image, body and dream, an exploration of the way in which through a series of images we penetrate beyond them, into a more immediate experience of life and nature in its constant becoming. The interweaving of images, poetry born out of dreams and music, reveals several interlinked topics that affirm life, its constant becoming and the human responsibility towards things that were, are or are yet to be.

Mala Kline is an established local dance artist, best known in Slovenia for her extensive body of contemporary dance work, and a philosopher who published her monograph Gledališča potencialnosti: Med etiko in politiko (Theatres of Potentiality: Between Ethics and Politics) with Maska Publishing House in 2019. She is one of the most prominent dance artists of her generation and one of the most insightful local thinkers on contemporary stage practices. Mala Kline first presented her work-in-progress Eden at CoFestival in 2012, at its first edition, and in 2018, when we saw her work Song at the Španski borci venue.