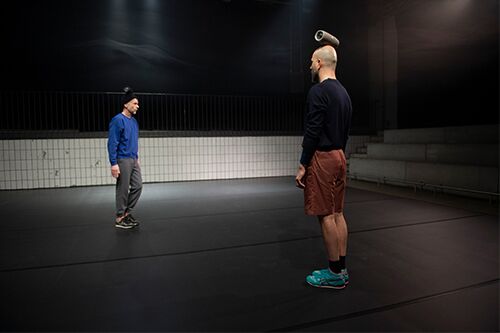 Martin Sonderkamp and Darko Dragičević are known among the Ljubljana dance audiences due to their pedagogic or choreographic work. In their new duet Tonträger (2019), the choreographic procedures or fragile movement, light and sound images are the carriers of magnifications that are supposed to make visible the translations of sound, word or light into movement and with it also reveal the unusual relations between the materiality of bodies, spaces and objects.

Sonderkamp and Dragičević are turning around the logic of the process of man’s self-narration, which is employed by the human to place himself into real places which he needs as a carrier of time, to turn them into spaces and prevent the collisions in them with his time. They turn the consistency of the self-narration, composed of language, into an exhibition: of movements, sound and corporeality. In this way, the dismantlement of subject in Tonträger turns into a choreographic process, into a configuration of bodies, space and objects. “The body that does not understand itself as a subject enables the visibility of hidden spaces,” they write. We already hosted the Sonderkamp and Dragičević tandem at CoFestival in 2016 with their performance Approximations #5. In their shows, they research the elementary choreographic fragments that were the focal interest of the American postmodern choreography of the 1960s and 1970s but they process them with fresh procedures derived from the myriad of contemporary technological possibilities.

The project is part of the Performance Situation Room program line under the Life Long Burning project and by the Creative Europe Programme of the European Union.