The Old Power Station  at 7pm 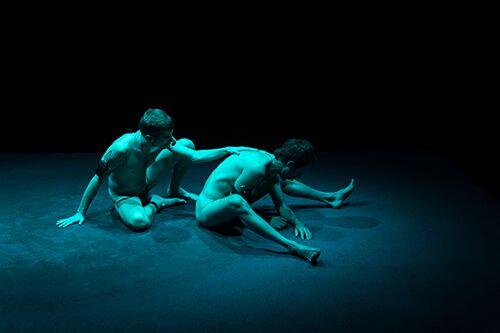 The resident choreographer of Cullberg Ballet (2019 – 2022), German-Swedish choreographer and performer Jefta van Dinther became a favourite of European dance stages. In the European contemporary dance context, he established himself with the work Grind that he created together with Minna Tiikkainen and David Kiers in 2011 and also presented it at the 2017 edition of CoFestival. With the mentioned work he got the Säde Award in Finland for performance with best lighting design and three other prizes at festival Favoriten in Dortmund. His choreographic works show his interest in technological extensions and amplifiers of dancing bodies with which he builds a perceptive illusion and triggers discomfort. The centre of his creativity is inscribed by the question of humanity which he addresses in relation with the social and posthuman forms of life.

Dark Field Analysis has a distinct choreographer’s signature. The work addresses the question of humanoids from the sci-fi perspective. We could easily claim that Jefta van Dinther put his own version of Blade Runner on the stage. He borrowed the title from the field of alternative medicine, where they use dark field microscopy to diagnose bodily pathologies in the blood. In that way, he shows us how medicine penetrates ever deeper in the body while in the domain of robotics and artificial intelligence science is trying to recreate the human body to be able to put its artificial replacements in it. With this, van Dienther manages to bring in a reconsideration on the dialectics between the object and the subject, artificial and natural body and its (ir)replaceability.

Organisation: Kino Šiška and NDA Slovenija, in collaboration with Bunker