Studio Moj Korak, Ljubljana from 11 am to 2 pm 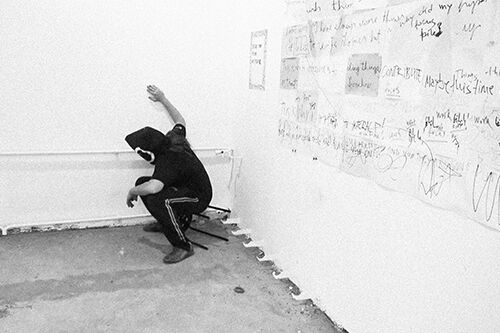 Darko Dragičević is a Serbian multimedia artists who lives and works in Berlin. He is active in the field of visual art, film and contemporary performing arts. His film and video works were awarded at several prominent international festivals. In his creative work, he is dealing with trans-positioning and combining of artistic methods to address socially stigmatised issues. He is interested in the potential of unusual bodies and presences, weirdness, uncommon perspectives and deviations. Also the project Failure as Practice was formed on this basis already in 2016 with the group City Guerilla from Belgrade and with the support of Goethe Institute in Serbia, with the aim to open up the act of failure (also) as a form of a positive currency in artistic processes. Failures, slips and fiascos are not only a part of artistic practices, they are an integral part of business, science and life itself for that matter. They have a negative value in contemporary world. Failure is the opposite of success, when its choreographer is capitalism, it needs to be removed. In some instances it is possible to employ it as a strategy.

In art, failure is present in different ways with its several variations (mistake, slip, experiment, openness, taking risk, etc.). It is an integral part of artistic practice that is being born in the space between the intent and its realization. It is a crucial part of artistic practice also because it addresses the art and plays with the unknown/obscure. In the wish to search for and open up different ways of seeing, knowing, existing and how to be placed in the world, failures and fiascos are the only possible condition of change. On the other hand, failure can also be an artistic strategy: conscious decision and direction of the artist to face the unknown. For the end we need to mention Samuel Beckett’s thought that says: ”To become an artist, you have to fail even more than anyone else would allow themselves to fail.”

After successful executions of the project in Belgrade and Berlin, Darko Dragičević will continue to develop artistic practices of failure in collaboration with Mestna gverila representative from Belgrade and local artists. They will be presented in the form of spatial interventions to create different, parallel forms of community with the resources that resist the general evaluation of success.

The event is made for invited participants.

The project is part of the Performance Situation Room program line under the Life Long Burning project and by the Creative Europe Programme of the European Union.