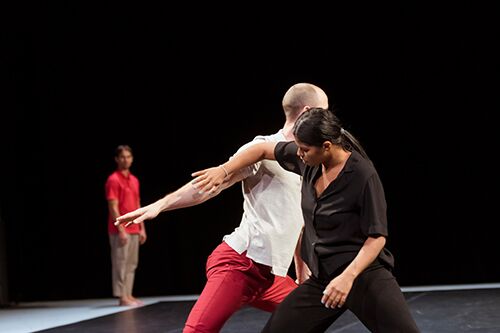 The Match is the second collaboration of emblematic American choreographic innovator Deborah Hay and the legendary Swedish ballet Cullberg in a short period. Dance quartet (awarded with the American dance Oscar – Bessie Award) is a dance-mill in which choreographer’s refined somatic principles are embodied in the best contemporary dancers and intertwined with filigree details. A dance delicacy!

Deborah Hay (b. 1941) started with her dance education in New York with famous Croatian ballerina Mija Slavenski and she performed regularly with Merce Cunningham ensemble in the first half of the 1960s. Perhaps this was also the reason why she could only perform with the Judson Dance Theatre on the first and the last five of their sixteen presentation nights from 1962 to 1964. In her dance work that is heavily demarcated by studio movement research she first started with early dramatic dance-technical experiments in which she used gaming devices, sports equipment and simple kinetic instructions. She soon started to be interested in various micro-kinetic processes in the ordinary, everyday bodily movement, heavily imbued with the knowledge of the so-called dance somatics. Deborah Hay places filigree research of movement into choreographic macro-structures with open scores and tasks that the dancers always solve in accordance with their own judgement, knowledge and responsibility. This forms magnificent works. Debra Hay’s oeuvre includes choreographies, studio and pedagogical work, also some films and books.

Performance The Match is an open work for four female and male dancers, layered with tasks and a score. In the framework of the given score it suggests them to perform different spatial, kinetic and voice tasks that build up the choreographic structure. At this point, there are very few contemporary dance ensembles that would be posses enough dance skills and bodily attentiveness, imagination and responsiveness to be able to create such an impressive performance of The Match as the Cullberg Ballet. In the first decades from its establishment (1967) this ensemble was led by Brigit Cullberg and Mats Ek and it moved the boundaries of ballet art. Since it was taken over by Dutch Gabriel Smeets a few years ago, Cullberg turned into a contemporary dance ensemble with top dancers and one of the most daring repertoires in the world.

The opening night will be introduced with a short documentary film, Alignment Is Everywhere (2019), directed by Peter Humble and David Young and shot together with the choreographer during her visit to Australia. In it, she meditates on her life, work and on her attitude to dance and the body. It is hard to imagine a more appropriate introduction into the work of Deborah Hay. In the lobby, a film, Deborah Hay Not as Deborah Hay (2011) will be shown as well, in which we can see the choreographer speaking while demonstrating different dance-kinetic tasks.